Willie James Jennings
Dr. Jennings is Associate Professor of Theology and Black Church Studies at Duke Divinity School. The author of numerous articles, his research interests include these areas as well as liberation theologies, cultural identities, and anthropology. An ordained Baptist minister, Professor Jennings has served as interim pastor of several North Carolina churches and continues to be an active teaching and preaching minister in the local church.

Cecil “Chip” Murray
Cecil “Chip Murry” received his Ph.D. degree in religion from the School of Theology at Claremont College and became a nationally known figure in the wake of the 1992 Los Angeles riots. He started FAME Renaissance, a non-profit organization that focused on economic also works on the Passing the Mantle project, which aimed to train clergy from African American churches across California in effective community development and organizing skills.

David Choi
David Choi is the pastor of Graceway Presbyterian Church, where he has served since its chartering in 2003. After emigrating to the U.S. with his family in 1972, He went on to recieve his M.Div, Th. M., and Ph.D. in Church History from Princeton Theological Seminary.

Jonathan Tran
Jonathan Tran joined Baylor’s Department of Religion in 2006 after completing his graduate studies in theology and ethics at Duke University. He teaches undergraduate and graduate courses and serves as Faculty-in-Residence in the Leadership living-and-learning center. He is also Assistant Director of University Scholars and sits on the faculty of the Renaissance Scholars Program, housed at Baylor’s Honors College each summer, and as affiliate faculty for Baylor’s Medical Humanities programs.

Kay Smith
Kay Higuera Smith, Ph.D. is chair of the Department of Biblical Studies and professor of biblical studies. Her published works deal with issues of the social world of the Gospels, gender, and Bible and culture. She teaches New Testament courses on the Gospels, early Judaism and Christianity, global biblical interpretation, and women in the biblical tradition. She also serves on the Faith Integration Council.

Laura Mariko Cheifetz
The Rev. Laura Mariko Cheifetz is an M.Div. graduate of McCormick Theological Seminary. She also holds an M.B.A. from North Park University and a B.A. from Western Washington University. She has been a preacher, speaker and writer in a variety of settings throughout the church. She is currently serving as the Executive Director of Church & Public Relations at the Presbyterian Publishing Corporation.

Elder Oscar O. Owens, Jr. is a born-again, Spirit-filled believer in Jesus Christ. He serves the West Angeles Church of God in Christ (WACGC) as Christian Education Director and Bible College President. He has been blessed to earn a B.A. in English Literature from UCLA, an M.Div. from the Union Theological Seminary and a Multiple Subject Teaching Credential from CSULA. Elder Owens is currently pursuing a D.Min. at Azusa Pacific University.

Allen Yeh
Allen Yeh earned his B.A. from Yale, M.Div. from Gordon-Conwell, M.Th. from Edinburgh, and D.Phil. from Oxford. He is an Associate Professor of Missiology at Biola University and serves on the Board of Directors for American Baptist International Ministries. Allen has been to over 50 countries in every continent, to study, do missions work, and experience the culture

Dr. Charlene Jin Lee is a practical theologian whose interests include contextual theology, narrative pedagogy, and post-structural curriculum theory. She holds a Ph.D. from Union Presbyterian Seminary and an M.A.Ed. from Harvard University. Currently, she is Lecturer in Theological Studies at Loyola Marymount University.

Rev. Dr. Joy Jittaun Moore, Ph.D.
The Rev. Dr. Joy Jittaun Moore is Fuller Theological Seminary’s Associate Dean for African American Church Studies and Assistant Professor of Preaching. She received her M. Div. from Garrett-Evangelical Theological Seminary and her PhD from the London School of Theology. She is an ordained elder in the United Methodist Church and serves on the board of directors for ZOE Ministries.

Mark WhitlockRev. Mark Whitlock is the executive director of the USC Cecil Murray Center for Community Engagement. He also serves as the pastor of Christ Our Redeemer AME Church in Irvine. Before his full-time call to the ministry, he served as the founder and executive director of FAME Renaissance, the economic development arm of First AME Church, which created over four thousand jobs with South Los Angeles.

Bill Watanabe
Former executive director of the Little Tokyo Service Center, Bill Watanabe will be honored for the 2014 ISAAC Legacy Award. From one staff person, LTSC now employs over 100 paid staff, most being fulltime and many being multi-lingual and multi-cultural.  He mentored many and they uniformly shared that Bill is a thinker, planner, and implementer.  Bill Watanabe was born in an American concentration camp called Manzanar, and is the son of first generation Japanese immigrants who came from Japan and during the 1930’s settled in the San Fernando Valley to grow and sell flowers in the then-booming wholesale flower market.

Donald Brown
Dr. Brown earned his doctorate in education from the University of Massachusetts-Amherst and a master of education and a bachelor of arts from Springfield College. Currently, Dr. Brown serves as Director of the Los Angeles Regional Center, one of 7 satellite campuses of Azusa Pacific University. In that role he provides leadership in overseeing existing academic offerings, and creating new ones for non-traditional undergraduate and graduate students.  Dr. Brown is also a special consultant with the Higher education firm of Maguire Associates based in Concord, Massachusetts.

Wendy Tijima
After graduating from Stanford University, Wendy Tijima worked with battered women and their children in a social service agency.  She earned an MBA from UCLA (Anderson) Graduate School of Management and began her ministry studies at Fuller Seminary’s Bay Area extension campus, then SFTS.  She was ordained in 1997 and served ecumenically in Hawaii for 10 years. She would later come back to California to serve as Associate Dean of Enrollment at SFTS, and is currently Stated Clerk and Associate General Presbyter for Presbytery of the Pacific.  She is a member of the Presbyterian Mission Agency Board, and has most recently served on the Structure Task Force for the Synod of Southern California and Hawaii.

Alan Nishio
Mr. Nishio was born in the Manzanar internment camp and would later become the founder and co-chair of the National Coalition for Redress/Reparations. He is President of the Board of Directors for the Little Tokyo Service Center and also a past President of the Board of The California Conference for Equality and Justice. Among all of these accomplishments, he is also a founding member and chair of the California Japanese American Community Leadership Council, a statewide coalition that seeks to preserve and protect California’s remaining Japantowns.

The ISAAC Dones and Nones Symposium was fantastic! So many good speakers sharing great wisdom on how to love, welcome, converse with, and journey with those feeling alienated by the church. I learned our approach as church leaders has to be one of love and really...

As a millennial who has been hurt by the Church, it can be easy to fall into the pattern of thinking that I am the only one in my situation. I know that God loves the church, so when my attitude towards the church is one of bitterness, I often wonder if that means... 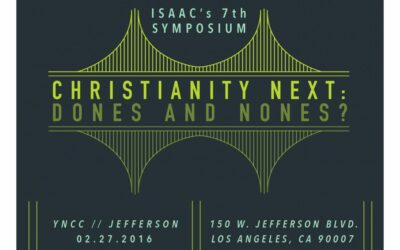 The 7th Symposium: Christianity Next: “Dones” and “Nones”?

How do we bring millennial young adults back or into churches who have declared they are “done” with organized Christian churches or who are Christians with no (none) involvement with churches? February 27, 2016 (Sat)Young Nak Celebration Church, Jefferson Campus The...