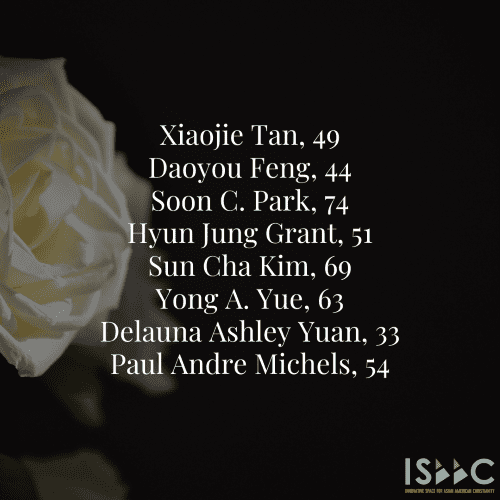 We at the Innovative Space for Asian American Christianity are outraged at the recent murder of eight people in Atlanta, six of whom were Asian women. We denounce the false comments by a white supremacist who is investigating this rampage that the incident was motivated by a “sex addiction” and that the killer was having a “bad day.” These women were targeted because of their race and gender, reflecting the fetishization of Asian women as well as the triple marginalization of being women, immigrants, and service workers. We condemn the double standard of the criminal justice system⸺one for white people and the other for people of color.

We also want to acknowledge the church’s role in this incident. The person responsible for the murders was an active churchgoer. The pastor of the church he attended said, “I don’t recall any sermons dealing specifically with racism, but the general tenor was to welcome and to be as inclusive as possible.” What the pastor said reflects one of the most glaring problems in evangelical Christianity today⸺it teaches people to be “welcoming” and “inclusive” without naming and working to dismantle white supremacy, white nationalism, and patriarchy. We condemn the racialization and masculinization of the Bible that goes against Jesus’ inclusive teaching.

Within our own community, we urge Asian American churches to name the racism and misogyny in the Atlanta murders. We urge you to support the women, service workers, and other marginalized folks in your congregations. We urge you to acknowledge the misogyny within our churches and work towards a culture of gender equality. And we urge Asian American Christians to reject the “model minority” stereotype and stand up for those most vulnerable.

Our hearts go out to the families and friends of the women as they suffer this immense loss.  We stand by and with the families of the victims and all Asian Americans, young and old, who are being assaulted and killed in racially motivated attacks. We condemn all the toxic Tweets and comments in the past five years that have promoted white supremacy and racially motivated violence from the top office of the U.S. May the river of God’s justice flood this broken nation.