The Crisis of American (White) Evangelicalism 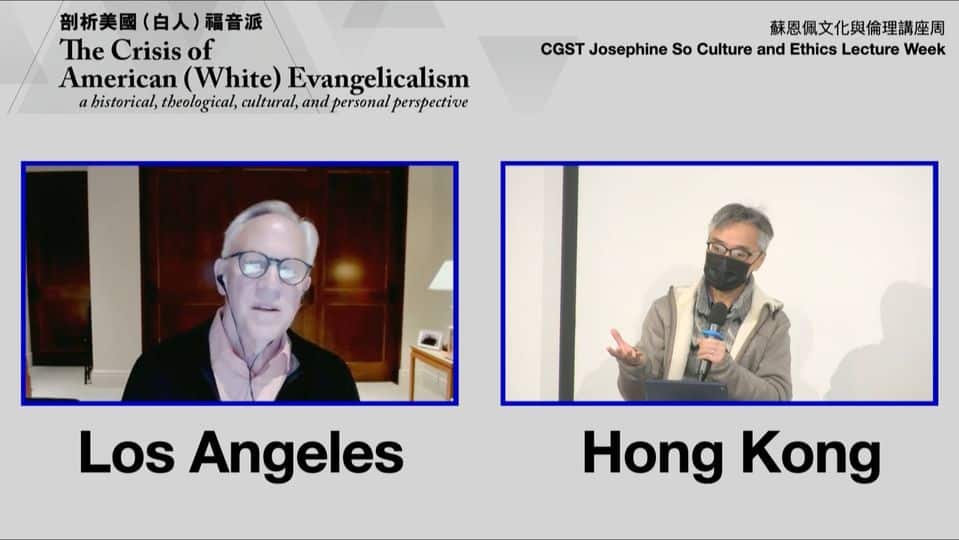 Dr. Mark Labberton, President of Fuller Theological Seminary, delivered a series of virtual lectures last week for the China Graduate School of Theology, Hong Kong campus. Titled “The Crisis of American (White) Evangelicalism,” Labberton shared his personal perspective on historical, theological and cultural factors that have shaped American evangelicalism. This post highlights several of his points and then relates them to the Asian American church.

He began his first lecture by pointing out the whiteness of America’s beginnings. Slaves, already present as a sizeable percentage of the nascent population, were classified as 3/5 human; Native Americans were not considered the equal of whites either. This explicit bias, already present in the nation’s culture, snaked its way into American religious life in a manner that continues to this day. Labberton maintains that white evangelical leaders did not speak up sufficiently during last summer’s simmering racial tensions. In the 2020 presidential election, 80% of white evangelicals voted for Trump, a percentage comparable to that in the 2016 elections.

In the lecture, “The Battle of White Evangelicalism: White Evangelicals Exalt Their Christology While Its Culture Eats Its Soul,” Labberton makes a pointed comparison between Franklin Graham and John Stott. While both men grew up in privileged white backgrounds, it is only Graham, a staunch supporter of Donald Trump, who defends the culture of privilege associated with white nationalistic American exceptionalism.

When looting and violence intruded into the 2020 marches against racism, Whites complained about the carnage perpetrated against buildings rather than the violence committed against Blacks, Latinos and Asians. Their message was that these minorities were actually the problem. They failed to see them as people created in the image of God.

This, however, was not the case with John Stott. Labberton relates a lengthy story that ends with how Stott preached to a solitary old woman in India in the same manner that he would preach to hundreds of thousands of people. Unlike Franklin Graham, Stott’s motivation was to be a servant, not a success.

In addition to whiteness, a second problem with American evangelicalism is its emphasis on maleness with direction from older white male leaders. This excludes half of the body of Christ from leadership, ignoring the contributions of women to church life around the world.

Labberton observes that while Bible Study leader Beth Moore is now holding a diminished role among white evangelical women, she has garnered a wider audience of women outside the white evangelical circle. He concludes that American white evangelicals are out of touch with the world and with the larger community gathered in worship.

A third point he makes is that evangelicals are consumed with success. The Megachurch model distills the message of size, wealth and numbers which is a non-Christological paradigm. What is absent is spiritual fruit including social justice for all peoples. Whites reign supreme as the narratives of other ethnicities need to be vetted and approved by those in power.

The Christology of American white evangelicalism is bankrupt at its core concludes Labberton. It seeks to hold on to a past marked by racial and gender discrimination rather than seeking the life transforming power of the evangel (gospel). Authentic Christology is absent. The power of God is sought in the evangelical church to do “my will,” not God’s will.

One, do we follow the voices of white evangelical leaders and uncritically look to them to shape our theology and ecclesiology? Sixty-seven percent of all Christians today reside in the Global South, not in the Global North. By the year 2050, this figure will rise to 77%!

Dr. Labberton’s lectures were sponsored by a Hong Kong evangelical institution. Thus his examination of the American evangelical church has implications for an Asian audience. The faculty of Asian seminaries and universities are heavily influenced by western writers and teachers, and in many cases the professors themselves received part of their training in the West. Nevertheless the day will come when they will conceive indigenous theologies and ecclesiologies that depart in some manner from the traditions of the West. How accepting will the Asian American church be when this transpires? Are we willing to look to models that have not been vetted and approved by white male evangelicals?

Related to this is a second question, the role of women in Asian American churches. The complementarian position held by many evangelical denominations overlooks the full gamut of leadership skills possessed by women that are on display in other parts of the world including the Global South. Are we losing out on these gifts given by the Holy Spirit to the church?

Finally, has the Asian American church bought into the “Big is Better” mantra of the evangelical church? Is success measured by the metrics of the corporate world? Are church attendance, building expansion and overflowing coffers necessarily desirable and accurate indicators of success? Labberton reminds us that the church must serve the world as Jesus did. Further, that we cannot transform the world unless we experience the transforming power of the evangel ourselves.

Excerpted from ‘I Answered the Call of My President’: Rioters Say Trump Urged Them On (The New York Times, January 17, 2021)—

In the past few days, a retired firefighter charged with assaulting members of the Capitol Police force told a friend he went to the building following “the president’s instructions,” according to a criminal complaint, and a Texas real estate agent accused of breaching the building told a reporter that by protesting in Washington, she had “answered the call of my president.”

A Virginia man has told the F.B.I. that he and his cousin marched on the Capitol because Mr. Trump said “something about taking Pennsylvania Avenue.” And a lawyer for the so-called QAnon Shaman — who invaded the building in a Viking costume — said that Mr. Trump was culpable, and he planned to ask the White House for a pardon.

“Does our president bear responsibility?” the lawyer, Al Watkins, told The New York Times. “Hell, yes, he does.”