Home » Blog » Uncategorized » Remembering and Passing on Where We Come From

Remembering and Passing on Where We Come From 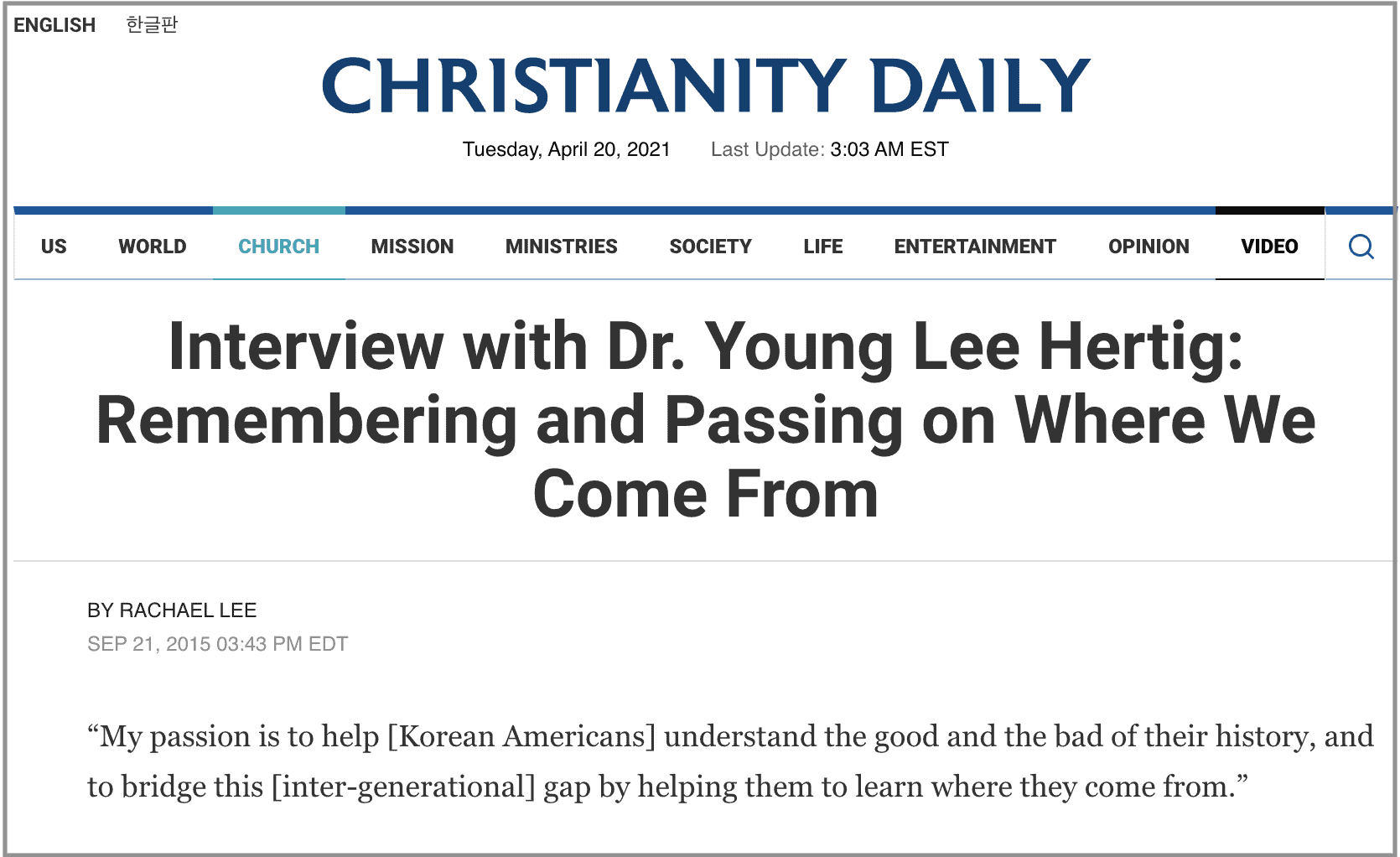 Interview with Dr. Young Lee Hertig: Remembering and Passing on Where We Come From

“My passion is to help [Korean Americans] understand the good and the bad of their history, and to bridge this [inter-generational] gap by helping them to learn where they come from.”

Such are the words of Rev. Dr. Young Lee Hertig. In the discourse regarding the inter-generational gap in the Asian American home and church contexts, a major aspect that cannot be left out is that of the culture and history of the ethnic group, she says.

Hertig is one who has immersed herself in the intersection of culture and faith in multiple fields: as a professor (she earned her Ph.D. in intercultural studies at Fuller Theological Seminary, where she also worked as a professor of cross cultural ministry for a period; and currently, she teaches at Azusa Pacific University’s Global Studies and Sociology Department), and in the non-profit realm (she is the current executive director at the Institute for the Study of Asian American Christianity (ISAAC), and the founder of Asian American Women on Leadership), among others (for the sake of clarity and brevity, her other involvements are left out in this article).

Hertig’s current pursuits are ones that focus on cross-cultural engagement, particularly between African and Asian American Christians, but her focus for a period had been the inter-generational dynamic in the Korean immigrant church.

Hertig and her husband, Paul Hertig, began reaching out to first and second generation Korean Americans as soon as they moved to Los Angeles from the Midwest in 1984, and worked together until 1997 to build a bridge of reconciliation between generations in two Korean churches in the greater Los Angeles area.

“We played revised ‘newly weds’ games, like having the student and the parent sit with their backs to each other and having them answer questions about each other,” Hertig recalled. “’What does my son want to major in college?’ for example. And they would both raise their answers at the same time. The father would raise up ‘law,’ and the son would put up ‘animation,’ and we would laugh.”

Games like the one mentioned served as light-hearted channels through which to express honest thoughts, she explained.

She recorded the stories that emerged from these interactions in her book, Cultural Tug of War: The Korean Immigrant Family and Church in Transition, which explores the roots of inter-generational conflicts and tensions that arise in the Korean immigrant home and church contexts.

“People are telling me today that they still read it and say that it’s totally relevant,” she said. “But I want it to be irrelevant now. That research was done in the 80s and I wrote it up in the 90s.”