5 Things I Have Learned at FTE (Forum for Theological Exploration) by Edward Kim, ISAAC Intern

Thanks to my professor and mentor Young Lee-Hertig’s nomination, I had the opportunity to go to the Forum for Theological Exploration (June 3-6) held in the American Airlines Training & Conference Center in Fort Worth, Texas! To add onto my excitement, everything was paid for including the airplane tickets, lodging, and meals! I initially felt ecstatic and special for being chosen among other applicants and nominees, however, that feeling quickly faded as I immediately felt a chilling dread when I had realized the situation I had gotten myself into. As an extreme introvert, just the thought of meeting and spending time with people for roughly four days was not appealing. To augment the situation, I felt pressured in every way possible. Thoughts like am I deserving of such an honor? They have chosen the wrong person! I am not who they think I am! These students, church leaders, seminarians, and professors were chosen or invited just like I was! I felt displaced. Intimidated. Outclassed. The whole idea was daunting… And yet, I knew this would be a great opportunity for me. Receiving much affirmation and encouragement from those around me, I finally set aboard the airplane that would launch me into an intellectual journey in which would be utterly remarkable.

To take this idea half a step up, I am inclined to contemplate the depth of what it means to age with time. This idea recurred in my mind countless times during the forum. Time is a frustrating and merciless idea which forced me to contemplate the ingenuity of the delicate intricacy of how a momentary time and a long over-drawn period of time act together in a seemingly one single plane. A plane in which there both instances of time may exist! To observe time’s very nature in constant and consistent change,  both molding and shaking an individual every moment while racing toward an individual’s vision is just so beautiful!(I got really sidetracked)

To go further into analysis, I had to really entertain the question. I know FTE does their best in attempting to create a more diverse environment in the forum. Thus, there needed to be some answer/s. Was it that Asian Americans were not as deeply involved or interested in theology or full-time ministry in this generation? Was it that there were Asians out there who were into theology or full-time ministry but was not ever nominated because of racial discrimination? Was it that Asian Americans are not well connected with the faculty in their schools? In some ways, the forum’s racial demography ignited my fascination as I also came to realize that there were only a handful of Latin American students or church leaders as well.

What is a community anyway? Many statements bounced around the room between the participants. There was a corporate agreement among the group that shared the understanding that we are all disconnected but we all want to share something with someone! Furthermore, an aspect of community was explained as a place where an individual can be deeply seen. This then, could be great and affirming but at the same time challenging and difficult!

However, this does not just stop here. Not only are communities good for people, but also they can be negative and counter-formative. Rather, the very existence of a community that has the power to cultivate and shape someone can even sound threatening to some. Jonathan made it clear by saying “We have gifts but those gifts are not without attachments.” Furthermore, another danger would be that the power of community expectation and conformity may reduce one’s uniqueness or strength. Thus it was concluded that a good community is a place where each individual or member of a community can flourish while the community flourishes.

As a leader of a club on my school campus, there is a responsibility on my part to build and be a part of a community on campus. However, I find it so difficult and in conflict of the very nature of the behavior of a community. How much do I sacrifice for the community? How much provision can I extend until I myself am in no position of giving but rather in a place of receiving? Finally these questions lead to the last key point.

BONUS: Just because you go to seminary does not mean you will end up a pastor nor does it mean you have to be a pastor to do God’s works.
I have met way too many people who are making a difference in terms of ministry without seminary background! I also find that many seminarians or those who have have their M.Div are impacting this nation as political activists, social injustice advocates, and business partners! 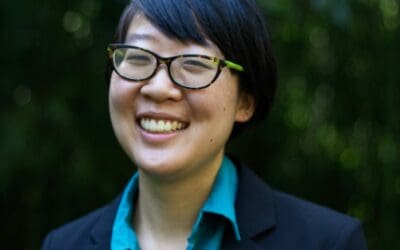 The Board of ISAAC recently voted to institute a new internship in honor of our late Multimedia Producer, Miriam Cho, who recently died unexpectedly. The Miriam Cho Multimedia for Social Justice Internship will be officially announced at our upcoming 15th Anniversary Gala.

By Bill Watanabe My wife and I have been members of Evergreen Baptist Church for nearly 40 years. When we started attending, it was located at the corner of Second & Evergreen in Boyle Heights (hence the name Evergreen Baptist). It was a small church that had seen...

Jooho Lee is a graduate of ISAAC's internship program. He was the first ISAAC intern to come from Princeton Theological Seminary as an MDiv student. He will start an Assistant Professorship of Business and Ethics at Pepperdine University, Fall 2017.